Is bocce an Olympic sport? 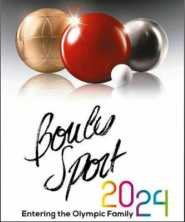 The closest bocce ever came to being in the Olympics was in the 1900 Paris Games when “Volo” was played as an exhibition sport. There have been a number of efforts since then to get bocce into the Olympics.
There has begun a new concerted effort to get bocce back into the Olympics for the 2024 games. The three disciplines that will hopefully be included are Petanque, a French variation of bocce, Boule Lyonnaise, or what we call Volo, and Raffa.  To learn more about this effort, and to become a supporter of the effort, click on the Boules Sport logo to the left.